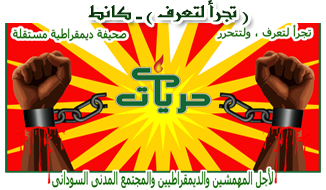 The Sudanese civil and political circles and those concerned with the Sudan were shocked by the news that the management of Hurriyat online newspaper has decided to suspend the publishing of the newspapers due to financial reasons and lack of funding from donors. It worth noting that during the last few weeks, Afiyat Darfur Radio has also stopped broadcasting and Radio Dabanga is witnessing a dwindling of support from donors.

SDFG would like to underscore the importance of analyzing these developments i.e. the diminishing of donors’ support to the democratic and independent Sudanese civil societies and media outlet such as Hurriyat, considering the international community new strategy of engagement with the government of Sudan that has little to do with freedoms, democratic transition, peace, good governance and the rule of law. It became obvious to many observers, especially Sudanese, that the international community is advocating a set of policies of engagement that call for the consolidation of the status quo which requires the suspension of all resources and funds available to opponents of the de facto government in Khartoum and the new strategy of engagement of the international community.

Since its establishment in 2010, Hurriyat has been a free voice and played a pivotal role in uncovering and exposing corruption in Sudan. Moreover, Hurriyat championed in the publication of news and stories which are banned by the security apparatus inside Sudan, such as news about the marginalized areas, the violation of human rights, the displaces and refugees. Furthermore, Hurriyat provided a free platform for all opinions and different school of thoughts in Sudan and succeeded in becoming a credible news and media outlet. As such, the suspension of Hurriyat publication would certainly have a negative impact in the efforts of positive change in Sudan.

SDFG call upon all Sudanese civil and political organizations and groups interested in Sudanese affairs to organize a campaign to support the re-publication of the newspaper, because it represents one of the advanced fronts in the battle for the restoration of democracy in Sudan.